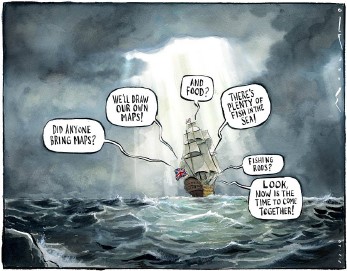 The vote of European Parliament marked the culmination of the ratification process of Brexit, or Britain’s exit from the EU, a process that has been going on for more than three and a half years after the UK voted for Brexit in a referendum in June 2016. The Brexit Withdrawal Agreement sets out the terms of the UK’s
“divorce” settlement with the EU, the rights of EU nationals resident in the UK and British expats on
the continent and arrangements for Northern Ireland.

Britain Prime Minister Mr. Boris Johnson had already signed the Brexit Withdrawal Agreement on January 25, 2020. Earlier, the British Parliament had on January 23, 2020 passed the Brexit bill which later received
Royal assent. The UK’s exit from the EU brings to an end the lengthy and tumultuous divorce proceedings that followed June 2016 referendum in which 51.9% voted to leave. The UK government formally announced the country’s withdrawal in March 2017. With passage of the agreement, the UK ended a 47-year relationship with the EU.

From February 1, 2020, the UK entered into an 11-month transition period in which it will continue to follow EU rules but without representation in the bloc’s institutions. This arrangement will come to an end on January 1, 2021, by which point the two sides hope to have completed negotiations on their future economic and security partnership, at the heart of which the government believes will be an ambitious free trade deal. Until then the UK will remain in the EU’s single market and customs union and the movement of people between the UK and the rest of the EU will also continue.

With Brexit finally done, the people and politicians in the United Kingdom now look forward to tangible results of the same with high expectations and accountability. The Sunday Times, London, in its editorial on February 2, 2020, said that it has been the stock in trade for British Prime Ministers  for nearly half of a century to blame Brussels for problems of their own making. That will not wash in future, as Mr. Michael Gove, Chancellor of the duchy of Lancaster and one of the architects of Brexit, accepts. Now, the buck will stop with the Government. “People will now be able to hold those in power more directly to account, to yank on the chain and demand results,” The Sunday Times quoted Mr. Gove.

The end of the UK’s association with EU may also be a beginning of bickerings over exit negotiations with the Downing Street already crying foul about the tactics adopted by the EU. It accuses EU of “hypocrisy” by insisting on binding level playing field conditions which are yet to be determined. According to The Sunday Times, for Mr. Johnson, “The prospect of fractious few months of negotiation, with seasoned EU observers warning that it could all end in tears in the second half of the year, is far from ideal.”

This prospect of UK and EU engaging in bitter negotiations tooth and nail, may lead one to believe that Brexit is yet to be done. There is a general perception in the UK that the Government can achieve more in a short time in “levelling up” the economy than decades of regional policy in the past were ever able to do. Mr. Johnson cannot afford to belie such expectations. He has to walk his talk of “astonishing moment of hope,” and that the “doubters, the doomsters and gloomsters” will be proved wrong.

The UK’s exit from European Union presents a potential upside for India. Brexit will make London to seek a more robust trade relationship with New Delhi. Britain and India have been so far unable to reach a free trade agreement, with negotiations having become mired in the convoluted financial politics of the 28-nation EU bloc. There are about 800 Indian-owned companies in UK employing about 110,000 people. The UK is the third largest source of Foreign Direct Investment in India and India’s largest G20 investor.