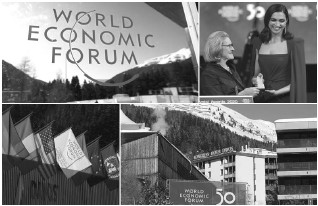 India showcased its immense economic potential and the vision for a $5 trillion economy by 2024 at the mega World Economic Forum (WEF) Summit at Davos at the Swiss ski resort of Davos (Switzerland) from January 21 to 24, 2020. Nearly 3,000 participants from 117 countries, including 53 heads of state and other top leaders from politics, business, civil society, academia and media, participated in this 50th Annual Meeting of the WEF. The theme of the meeting was “Stakeholders for a Cohesive and Sustainable World.”

The Indian delegation at the Davos Summit was led by Union Minister for Commerce and Industry Mr. Piyush Goyal. The delegation included over 100 CEOs, Union Ministers and Chief Ministers besides Bollywood actress Deepika Padukone and spiritual Guru Sadhguru, who held morning meditation sessions at the summit.

Speaking at a session ‘Strategic Outlook: India’ at the WEF Summit, Mr. Piyush Goyal asserted that Indian economy is well-poised to take off and there is a lot of enthusiasm for making investments in the country. He also said Indian Government will hold discussions with Britain and European Union on Free Trade Agreements. On the Asia-Pacific-oriented Regional Comprehensive Economic Partnership (RCEP), Mr. Goyal said it was an “unbalanced trade agreement, which was really not fulfilling the guiding principles on which RCEP started about eight years ago, therefore India chose not to participate in it”.

Though India has been participating in WEF Summits, the turning point came in 2018 when Prime Minister Mr. Narendra Modi showcased a ‘New India’ and the opportunities available to global investors at the WEF. In the context of the government’s efforts to fast-track economic development, the world has begun to take cognizance of the fact that India will be a force to reckon with in the 21st century. India has gone beyond Davos to discuss issues that concern the global community. India has engaged at all levels on the issue of climate change, reiterating its support for the Paris Climate Agreement.

India has contributed to all the six core areas of activity that the Davos Summit focussed on, through which stakeholders can advance the mission of creating a more cohesive and sustainable world. These core areas were Ecology, Economy, Society, Industry, Technology and Geopolitics. The summit focussed on establishing stakeholder capitalism as a way of addressing the world’s greatest challenges, from societal divisions created by income inequality and political polarisation to the climate crisis.

To coincide with its 50th anniversary, the WEF also launched a new Davos Manifesto (that builds on original manifesto of 1973), which is a set of ethical principles to guide companies in the age of the Fourth Industrial Revolution. Companies, the new manifesto said, must pay their fair share of taxes; treat suppliers and workers well; accept fair competition; and have “zero tolerance for corruption.”

Woke capitalism, in short, was the dominant motif at Davos 2020. Among the initiatives launched at the Davos Summit included planting one trillion trees over the next decade and to equip one billion people with the necessary skills in the age of the Fourth Industrial Revolution. Another major highlight of the summit was WEF’s 15th ‘Global Risks Report,’ which, for the first time in its history, said that all of the “top long-term risks by likelihood” are environmental.