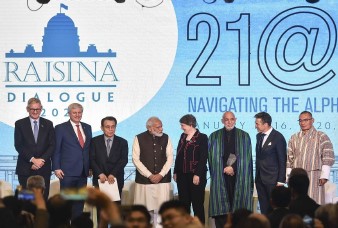 Over 700 international officials, of which 40% were women, participated in the Raisina Dialogue 2020 in New Delhi from January 14 to 16, 2020. The Dialogue which had the theme ‘21@20: Navigating the Alpha Century’ was inaugurated by Prime Minister Mr. Narendra Modi. Twelve Foreign Ministers, including those of Australia, Maldives, Russia, Iran, Denmark, Africa, Estonia, Czech Republic, Hungary, Latvia, South Africa, Uzbekistan and the European Union (EU), besides the National Security Adviser (NSA) of Afghanistan, the Deputy NSA of the United States were among the participants at the Dialogue. The Raisina Dialogue is India’s annual global conference on geopolitics and geo-economics. The conference was organized by the Observer Research Foundation in collaboration with the Ministry of External Affairs. The conference included intensive deliberations in over 80 sessions and panel discussions.

An International Summit on ‘Women in STEM—Visualising the Future: New Skylines’ was held on January 23 and 24, 2020 at India Habitat Centre, New Delhi. More than 350 participants including top scientists, socialists, entrepreneurs, researchers, and teachers from different fields of STEM (science, technology, engineering, and mathematics)  across the globe participated in the event that was organized by the Department of Biotechnology, Ministry of Science & Technology.

The 50th World Economic Forum (WEF) was held at Davos, Switzerland from January 21 to 24, 2020. The event saw the participation from over 50 heads of state from 117 nations across the world. The theme of the WEF 2020 was ‘Stakeholders for a Cohesive and Sustainable World’. The theme highlighted an idea perpetrated by WEF Founder and Executive Chairman Mr. Klaus Schwab that the managers of the companies have a duty towards customers and the whole economy, besides the company’s shareholders. The first day of the forum saw prominent speakers like US President Mr. Donald Trump, young environmental activist Ms. Greta Thunberg and the European Commission President Ms. Ursula Von Der Leyen. Union Minister for Commerce and Industry Mr. Piyush Goyal led the Indian delegation at the WEF 2020.

Around 35,000 delegates from 170 countries participated in the World Future Energy Summit at the Abu Dhabi National Exhibition Centre (ADNEC) from January 13 to 16, 2020. The theme of the summit was ‘Rethinking Global Consumption, Production, and Investment.’ The event focussed on energy, solar, water, waste and smart cities. As many as 90 speakers deliberated on clean energy generation, water sustainability and discussed the ways in which digital innovation can help improve the quality of life in an urban environment. Along with the summit, the Climate Innovations Exchange (CLIX) was also held. The participants included music star and philanthropist Akon, President of Rwanda Mr. Paul Kagame and Prime Minister of Bangladesh Ms. Sheikh Hasina among others. The World Future Energy Summit was first held in 2011.

In an effort to negotiate a political settlement in war-torn Libya, several world leaders pledged that they will not interfere in the conflict and also agreed to uphold the UN arms embargo. German Chancellor Ms. Angela Merkel made the announcement on January 19, 2020, at the Peace Summit in Berlin. Leaders from Russia, France, United Kingdom, Germany, and Turkey participated in the summit. She said that the leaders have reached an agreement on a comprehensive plan to support a ceasefire in Libya. She said that they agree that they should respect the arms embargo and that the arms embargo should be controlled more strongly than it had been in the past. However, most leaders seemed to indicate that an official ceasefire agreement was still a far-fetched idea. Libya has been wracked by conflict since 2011 after an uprising ousted leader Muammar Gaddafi. The two warring factions in the country include the UN-backed Government of National Accord (GNA) and the forces of former military commander General Khalifa Haftar. Both Haftar and GNA’s Prime Minister Mr. Fayez al-Sarraj attended the summit but did not participate in a direct meeting or the multi-party talks.